LEVICK- from the Old English personal name  Leofeca or Leofric.  Alternatively from the Old French  l'évêque meaning 'the bishop'.

The names in the table below appear in the text which follows it:

He was married to Mary Downes on 9 Aug 1768 in Worksop. Children of George Levick and Mary Downes were:

He was married to Elizabeth Cartwright on 9 Feb 1801 in Hayton, Notts.

He was married to Hannah on 17 Jun 1811 in Blyth, Nottinghamshire. by banns published in the Chapel of Austerfield, in the presence of Ann Smith, Charles Smith, Elizabeth Levick. Hannah was born about 1792. and she died in 1834. Children of James Levick and Hannah were: 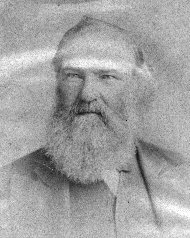 His wife Ann Elizabeth Legard was born on 15 Mar 1831 in Horkstow, Lincs. She died in 1904 in Thrapston, Northants. She was called in the Spilman family 'Aunt Annie Legard'.

Children of Henry Levick and Ann Elizabeth Legard were:

22 iv. Emily Gertrude Levick was born in 1859 in Little Gonerby, Grantham , Lincs. She was a Midwife. Family legend says that her first delivery was Thomas L Spilman and that Helena M Spilman was her last. In old age ,she was poor and T L Spilman used to send her money at Xmas.

24 vi. William A Byron Levick was born in 1863 in Little Gonerby, Grantham , Lincs. Perhaps named after his great-uncle William Byron.

His wife Mary was born in 1830 or 31 in Ranskill. Children of Robert Levick and Mary were:

21. Henrietta Levick was born in 1857 in Little Gonerby ,Grantham. She is believed to have married a Mr Hutchinson .

Children of Helena Blanche Levick and Thomas Spilman were:

Ellen (Nellie) Levick and Ives had no known children.

Children of Frederick Tonge Levick and Sarah Ann Hewson were:

She was married to Herbert Wood on 16 Jul 1919 in Whitton, Lincs, England. Herbert Wood was born on 1 Feb 1890and he died in 1964. He served in the Lincolnshire Yeomanry Cavalry during World War 1 as a platoon-machine gunner He was a Bank Accountant (Under-Manager) in Sheffield, England. He retired to Bonby, Lincs . Children of Mary Aitken (Molly) Spilman and Herbert Wood were:

She was married to Samuel Beck McKeague on 22 Mar 1922 in Pro-Cathedral, Calgary, Alta, Canada. Samuel Beck McKeague was born on 26 Aug 1891 in Cullies, Shercock, Co Cavan, Ireland. He was christened on 31 Dec 1891 in Corraneary Presbyterian Church, Bailieborough, Co. Cavan, Ireland. He died on 28 May 1976 in Calgary, Alta, Canada.